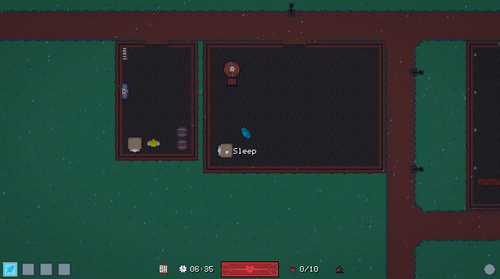 It's been a hectic couple of months for me, as I've gone through some major life changes, but I'll always find my way back to hacking on Evenfall. As of right now, my focus has turned to the theme of "strengthening the core" - hammering out bugs, culling outdated features and making sure the game is ready to re-expand into its new form.

As recently announced, Evenfall has taken a sharp turn in plans, changing the planned gameplay and world quite a bit in order to put a cap on scope. Part of this means, well, scrapping most of the overworld that already exists. I plan to save some of it, but frankly there's not a whole lot there that would be more interesting than new developed areas, so maybe something will remain as an easter egg.

Filling out the new hub town, getting all the NPCs written up and defined, making sure that the plans all make sense and reworking some of the gameplay are on my mind. The new city - The Eye - is the only town we know in this world. The people in it have been around each other their whole lives. Connections, grudges, and dynamics between them will be strong. How you (as Petrich) interact with them, and what the town has to offer is key to the foundation of the gameplay, given that this is your base of operations. Old concepts from past playtests like paying for a room to sleep in are out - you live here, you don't need to pay. Similarly, there's no longer a need for Home Beacons, though a waypoint system like the one from the Diablo series is likely going to find use from the beacons.

Teleporting home will be replaced by said waypoint system. I want to stay true to my original concept for the feel of the game: going outside of town is dangerous, you damn well better be ready to get yourself out of trouble! That said, a spell to teleport home won't be an impossibility. Likely, it will come as a reward, probably from a side quest.

All in all, I am getting the game more "ready" to rapidly add content in the form of areas, enemies, quests and battles. Finalizing a few new systems, culling and reworking some old ones to better fit the new theme, and making sure the game feels right in its new direction.

More updates to come. And I'd like to write more deep dives into development process and theory. If you haven't read it yet, check out my previous post, The Creating of an Enemy.

Evenfall: Age of the Storm